A Reminder Why Bearing Witness Is Important

The posting was one among many that arrived in my email a couple of weeks ago. The Birding Listserv consists of posts bird sightings within Indiana. This one was different and it caught my eye.

The posting came from a resident of southern Indiana. He wrote of sightings but included a lamentation about the loss of breeding territories for Bobolinks near his home.  A few years ago, he had discovered four breeding locations for these beautiful birds of tallgrass prairies, fields, and grassy pastures.This represented some of the most southern breeding territories for Bobolinks in our state. In subsequent years he discovered two of the four areas devoid of the nesting birds.  The land owners had released cattle or cut hay during the breeding season. Gone were their warbling, bubbling songs.

A couple of years later, two immense churches with large parking lots, were built and an adjacent field planted in winter wheat. No Bobolinks. There is now only one location left of the original four. The Bobolinks, Grasshopper Sparrows, and Savannah Sparrows found these areas unique enough to meet their needs for nesting and raising young. But no more.

Loss of habitat. It continues. Perhaps for some it is simply a lack of knowledge. What if we educated the public about the seasonal activities of wildlife in their areas and how human actions can impact the flora & fauna? What if the landowner was aware of the species his/her land supported? It likely would not halt the construction of churches, subdivisions, and strip malls. But what about the farmer or landowner? Would the farmer or landowner wait to mow? Could he/she wait a few weeks to release cattle? Could they afford to alter their schedule or methods? Would the education make a difference?

I replied to the poster the following-- "You are bearing witness to those local areas that are priceless in a way few recognize. It is important that you record, share, and continue to bear witness . . . for when they are gone, you will have made them at least a part of your history & with those you share the story."

In these current times, the pursuit for "more", the swell of greed, and the disconnect from the earth, the one hopeful act we can choose is to bear witness. I believe in education and bearing witness. What about you?

I invite those who read this blog to participate in dialogue. Feel free to comment.
Posted by Joni James at 8:49 PM No comments:

Enjoy the book trailer for DANCING WITH HERONS: Bearing Witness to Local Natural History. It is a book of prose, stories, & poetry.

Posted by Joni James at 9:15 PM No comments:

A pair of Eastern Bluebirds are nesting about 15 feet from my front door in a nest box. Five nestlings are present---only a few days old.

Today I watched a Chipmunk foraging in the leaves, run into the yard (in the direction of  the nest box). Immediately the male Bluebird dropped like a rock out of the branches above and dive-bombed the small mammal. The Chipmunk shot straight up and took off back into brushy area.

A Carolina Wren has been building a nest in a old plastic gourd which hangs in my open shed. I will keep everyone posted on the progress.
Posted by Joni James at 10:00 PM No comments:

The Book Has Arrived!

DANCING WITH HERONS: Bearing Witness to Local Natural History has arrived! I am very pleased with the book and somewhat relieved to have them safely in hand. It has been a long process that began as journal writings throughout the 1980s and into the 1990s. During the 2000 decade I began revising some of the stories into essays. Other entries were polished to stand alone as encounters that were memorable to me in some way or another. From 2005 they were loosely collected in an attempt to mold them into a book and refine the themes.

Finally during the summer of 2010 to present, I worked diligently at revising and editing the final manuscript then readying it to be published/printed. The labor of love that took place in the last year was a result of much teamwork with my friend, editor, layout designer, & webmaster-- Pat.

So here it is. Independently published by HeronWatch Publishing (me). If you enjoy memoir, nature writing, spirituality, and poetry, I invite you to read the book.

SERENDIPITOUS MOMENTS are always etched in my memory. It was my last day before returning to work—the classroom. On a late August morning, fog was rising from all the pond surfaces. I was nagged by a feeling that something special would occur.
Standing at the base of the hill that I use as my entrance to these ponds, I turned and was met with an ethereal sight. Walking cautiously along the pond levee was a female white-tailed deer. She was bathed in the fog and backlit in the amber sun. She had emerged from the woodland nearby.
You may order from my website: http://www.jonijamesphotography.com/
You can "LIKE" it on Facebook. See the links in the right margin.
Until next time . . .
Posted by Joni James at 7:06 PM No comments:

Email ThisBlogThis!Share to TwitterShare to FacebookShare to Pinterest
Labels: Dancing With Herons, writing

This weekend I assisted with our local electronics recycling day from 9:00-2:00. It was a success and a great deal of electronic equipment will be recycled instead of buried in a landfill. It was an eye-opener. I know intellectually that we are a "throw-away" society. I know that technology advances in quantum leaps. I know it is easier and more cost efficient to buy new than to have something repaired these days.

I watched car after car unload numerous televisions. Of course, the switch to digital essentially made many TVs obsolete. Many cars delivered 2, 3. and 4 computers. Of course how long had they been holding on to these just waiting for someone to make recycling a possibility and convenient?
The piles of televisions, hard drives, monitors, keyboards, printers, etc. was stunning. Just 5 hours on one day, in one small town, and an estimated 200 cars . . .

I realize there are always circumstances in which we must buy new---such as electronics breaking, needing to upgrade, too costly to repair, etc. but I began to think about all the possessions I own.
Perhaps REDUCE would be the best environmental act. Step One.

Changes and Walking Through Doors

Welcome to my first blog post! Here at Bearing Witness I hope to share, inform, educate, and inspire. And I hope to hear from you.
The last several months have been about big change in my life . . . my career. Many doors have presented themselves and small windows. I have been focused on walking through doors and opening windows and trusting . . . believing.

I am looking forward to receiving my book, DANCING WITH HERONS: Bearing Witness to Local Natural History from the printer within the next 3 weeks or so. This is a project that I have worked on for several years and with great dedication the last 10 months. Besides a personal goal, it is a promise made to my mother and soon it will be fulfilled. I have had unselfish guidance from my friend Pat. She has been an editor, web designer, and manager. I am filled with gratitude for her devoted assistance and friendship. 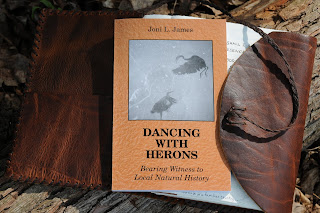 I will be announcing the availability of the books through Facebook, Good Reads, this blog, and email. Stay tuned. You may read an excerpt, and info about it at my web site: http://www.jonijamesphotography.com/. Please visit my site and enjoy the nature photography also.

Stay in touch!
Joni
Posted by Joni James at 4:29 PM No comments: