It has been eventful lately. We are coming into August-- we are in an extreme drought and there are not many water sources available for wildlife. I usually have Great Egrets migrate through at and around my property due to the ponds. Within the last week though, the largest number of egrets has gathered. Twenty Great Egrets as well as 20 Great Blue Herons (a rather high number also but not a record).


Yesterday, I discovered a beautiful moth fluttering outside of the local Subway restaurant. I collected it in a cup and brought it home to photograph it. During the moth's fluttering it revealed the gorgeous reddish-pink hind-wings with black bands. I hoped it would extend its wings so I could capture the rich color. It did not. Below is one of the photos-- the only one that allows a peek within. As it grew dark, this nocturnal beauty, called The Sweetheart (Catocala amatrix)  flew off.

While the bird bath was full, several were waiting their turn.


Everyone wants refreshing water . . . especially during a drought.
Posted by Joni James at 10:02 PM No comments:

What a surprise today! I just returned from visiting Sodalis Nature Park in Hendricks County. I stopped by this lovely park after running an errand at Mooresville. I was doing some macro photography work along the dam with Chicory and other wildflowers when suddenly I saw a dark figure scurrying among the plants on the top of the dam-- an American Mink! It quickly walked along the dam and then pause to look around. It was very difficult to see among all the vegetation, and of course I only had my 105mm macro lens on the camera at that moment. These are elusive mammals, so to get a look at one was a gift.


Below is a quick image I was able to take. Not a good photo but you can at least tell what it is.

Posted by Joni James at 2:29 PM No comments:

Speaking for Grassland Birds & Their Habitat

Let me speak for grassland birds. I do not profess to understand the intricacies of farming/managing land for the harvesting of hay . . . but I have been doing much reading lately to learn more about it. Perhaps we can all develop an awareness of our land. Grassland birds are declining significantly across America. Just within the last 30 years, the populations of these birds have declined 70-90%.


A grassland area in our county was home to many species of birds earlier in the summer. Dickcissels, Eastern Meadowlarks, Grasshopper Sparrows, Red-wing Blackbirds, etc. filled this area with song and life. Not long after I discovered this rich area, the field was mowed. Gone were the birds. What is not known is how many nests and young were lost also? The area was then quiet. Lost habitat.


What if we could share the land and be aware of our neighbors who dwell with us? What if we managed land for grassland species too? Not only birds benefit from these habitats but also many pollinators--butterflies, bees, as well as dragonflies, and other wildlife. Grassland birds such as those mentioned above and Eastern Bluebirds, Wild Turkey, Bobwhite, Savannah Sparrows, Sedge Wrens, Bobolinks, Northern Harriers, and American Kestrels depend on these unique habitats. These birds eat many insects especially during their breeding season.

The ideal grassland sites are at least 10 acres of continuous open fields (no woody vegetation),  but preferably more than 15 acres. Old hayfields, overgrown cropland, and abandoned fields are suitable for grassland bird habitat development. If as a landowner you have less than 10 acres, you can still consider developing and managing it for these species.


Grassland species benefit from varying grass heights. Planting native grasses and plants can enhance the habitat with a mix of warm and cool season grasses. Warm season grasses include Little Bluestem, Indiangrass, Big Bluestem and cool season grasses include Kentucky Bluegrass, Timothy, Red Fescue, and Redtop. Most grassland birds can tolerate a moderate forb content (weeds & wildflowers such as goldenrod, daisies, asters, etc.), however if forbs equal or outnumber grasses, the habitat is less attractive to them. Fields are best if they contain no more than 25% other plant species than grasses.


There is much more detail to understanding these practices and the needs of grassland birds. Helpful resources abound on the internet and I would be pleased to share those sources with anyone who wants to know more.
My purpose is not to tell landowners how they should manage their farm or land. I simply invite readers to stop and consider the possibility of adjusting your management practices for better stewardship. Increase your awareness of your land to know what species live there.
As Aldo Leopold stated, "Conservation is a state of harmony between men and land."

Today the last two plastic gourd nests of Tree Swallow nestlings fledged. One nest  had two nestlings and the other had four. It is always bittersweet when the day comes for the last brood(s) to leave. I am always happy and relieved that they successfully fledged their nests but sad that the nesting season for them (and me) has ended. It has been a strange nesting season here. The early spring/summer, the heat, and the severe drought has taken its toll. We still have had no rain.


Best wishes to all "my" Tree Swallows for a safe migration to your wintering grounds and a safe return in March 2013.

In preparing for a educational workshop on wetlands, I collected a couple of wetland plants (American Lotus and Cattails) in order to illustrate the adaptations of these plants. Adaptations are the physiological, morphological, & reproductive characteristics that plants and animal have to survive in their specific environments.


There are three basic characteristics of that help define a wetland. (1) hydric soils (saturated soils), (2) hydrophytic plants (plants adapted to grow in wet/hydric soils, and (3) hydrologic regime (the presence of water over a period of time. In hydric soils, there is no oxygen so plants must thrive in anaerobic conditions. In order to do so, they have adaptations that allow them to  transport oxygen to their roots. One of those amazing adaptations is aerenchyma. Aerenchyma is the presence of air holes in the leaves, stems, and roots of aquatic plants.


I always marvel at the amazing adaptations that plants and animals possess.

My new challenge is to begin to learn to identify moths. At the end of June, my niece and I did a little mothing. I hung a white sheet outside and set a black light in front of it from 10:30 pm-12:00 am. It was interesting to see what was attracted to the light. I intend to do more mothing so stay tuned.

One of the more interesting moths that would hold still long enough for a photo was a female Chickweed Geometer (pictured below). Hopefully my identification will be correct!

For a follower who desired images of my sand garden . . . you will be disappointed. It is exactly that-- sand bordered by river rocks with a few statues and interesting stones. It all looks sad with the lack of rain and the brutal heat.
BUT--I don't have to plant and replant. I do have to weed at times. 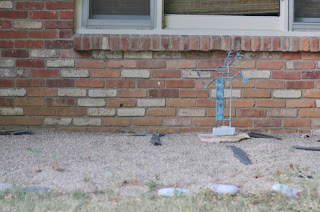 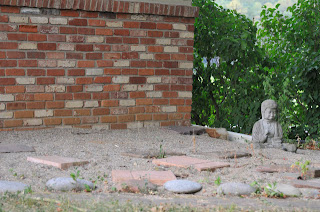 Who's Hiding in the Willows?

While walking slowly through the ponds one evening recently (before the 100 degree heat wave arrived), I glanced to my right and discovered a white-tailed deer foraging amond the willows and other plants.


The doe was as surprised to see me as I was to see her. The next view I had was of the white flag on her rump.

While sitting on my patio a couple of weeks ago, I observed an Eastern Phoebe fledgling hanging around the wall of my sand garden. I began photographing it as it came in close to eat the flying insects.

In a series of photos, I caught the young bird after it had eaten a bee. Whether it needed to expell the bee in order to eat more or that the bee had caused a problem . . . I don't know. After inspecting the remains, the bee was recognizable but not by much.
﻿﻿
﻿﻿﻿﻿
﻿﻿ "Yuk!" said the Phoebe! 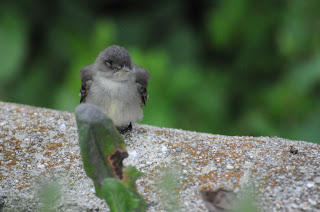